We’re excited to announce: We are expecting a litter on 18th October 2014! 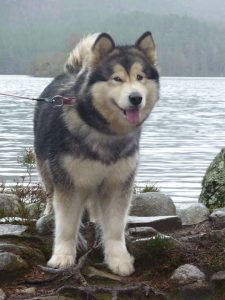 Genie is litter sister to Sultan (Marahootay Prince of Persia) who is an American Grand Champion and working towards his Dutch, German, Belgium titles. Also to Pink (Marahootay Desert Orchid) who lives in Holland and is a Dutch and German Champion. Genie loves to work in harness and has the softest of natures, with an enormous coat!?She has huge feet, angles in all the right places and is so light on her feet with a real zest for life, and the most girlie of faces.

Austin has longer legs, a similar face but with lovely almond shaped dark eyes and a lovely temperament. 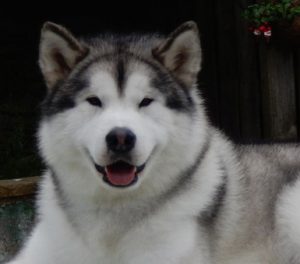 Austin’s owner says this about him:
“Austin joined our pack at the start of 2012 and is a full brother to our Nemo. His pedigree almost speaks for it’s self, but is a superb Storm Kloud line breeding combining influential Sire Fergus a US Import and Polish Champion, and Dam Starlight, a Multi Champion and speciality Show Winner and litter sister to the Crufts 2009 Best of Breed Winner Skywalker Sausimayok. He possesses the best of both his parents, with impeccable breed type, plenty of bone, correct thick and harsh coat, and the most gorgeous head piece with dark oblique eyes and small thick well furred ears. He has clean and powerful movement, and is a joy to watch in the ring.”

His very first show upon entering the UK saw him Best Puppy in Bread and Working Puppy Group 1 under Breed specialist, and he has continued in this vein, winning more Best Puppy and Best of Breed at both Championship and Open level. Proving himself in harness as well as the ring, Austin is a multi AMCA titled working dog. He earned his first WTD leg at the age of just 9 months, closing his title later that season. His WWPD title came in his first competitive season, and he just loved our ventures to get his WPD Title and barely notices his pack!

We feel that these two lovely examples of the breed will complement each other doubling up on feet and bone and coat and movement and are very excited about this combination, as it brings together dogs such as Windchaser Seventh Son, Storm Kloud Qquest for Glory, Brad Pitt del Largo Degli Orsi, Storm Kloud Corner the Market, to name but a few.

Puppies are due on 18th October and will leave us at 9 weeks having had their first vaccination, been vet checked and micro chipped. All homes will be house checked. They come with the first 6 weeks insured under the kennel club scheme and also food for settling in and a puppy pack. We are here always to support our puppy people with any questions or concerns they may have.