Once upon a time there was a family living in a house with a big garden on the edge of London. They had a lovely mongrel called Tramp, who was a cross labrador/spaniel and was getting old. The family decided that they didn’t want to have an empty dog free house and so began searching for a puppy that would give them as much pleasure as their beloved Tramp. They searched the internet, watched television programmes and finally settled on a breed called the Alaskan Malamute. The breed was larger than their present dog, but was known to be very people orientated and not a one man dog, very important with three children in the household. 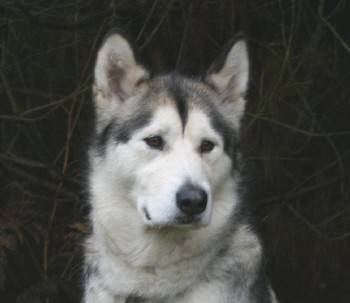 After looking at many people’s web sites and visiting Crufts, the family settled on a breeder called Polarpaws.

It took the family some 2 and a half years to obtain their family pet; in the meantime they went to the Alaskan Malamute Club show and were thrown in the ring by Leah and Terry (just to get a feel of things) and they went to a couple of rallies (just to watch of course!).

At last their first puppy arrived a bitch and as Terry put it owning a Malamute and not showing and working it is a bit like owning a Porsche and not driving it. Now what to call her?!

Our first dog was Tramp and with three children in the house we asked them for a name. They searched their videos and chose Narla.

So the family started ring craft and entered their first open dog show as soon as the little girl was 6 months old. I would like to tell you that we won our first open show, but we didn’t. As soon as the speaker system started our young puppy headed for the hils, taking me with her, much to the amusement of everyone watching, including the judge! However, we persevered and she did qualify for Crufts that year.

Now the father of the family had really enjoyed watching the dogs working at the rallies the family had visited, and so some four months after their first malamute the family had a second. Again the children were asked for a name for their new puppy, and again they searched their videos and this time they came up with Mushu. This bitch also qualified for Cufts but was a more placid, easy going bitch and she won first puppy bitch at her first Championship Show at six months of age.

Once both dogs were a year old we began to train and compete at rallies. Again as with showing it took time and patience, but was a lot of fun, and I am sure we were slower to learn how to do things than the dogs.

We now have eight dogs at home with us.

Our older retired dogs Hero and our girls Mushu and Narla. 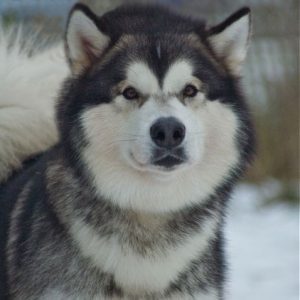 Our foundation dog Stormchaser Prince of Darkness Hades, our thanks to Rita and Tonny for him. Hades is now an International Champion and a Champion in 5 countries, he won Alaskan Malamute Best of Breed at the Eurodog Show in Slovenia 2010 and got Reserve Best in Show at Dormund October 2010 the first malamute to do so.

Our foundation bitch Kasaan’s Forever Fortune Effie our thanks to breeder Bonnie McMahon-Howen for our beautiful girl.

Our garden no longer looks as big, and certainly not as green! There are more holes than we remember, and we now have dogs that sing along with the passing sirens! Would we change our choice of dog? Never! We are totally hooked, they bring so much pleasure and we have so much fun with them that we cannot imagine our lives any differently. We have a circle of friends thanks to this incredible breed that we feel very honoured to call friends, and given our busy lives these dogs have given us the opportunity to experience new challenges as a family.

If you are interested in this breed what advice would I give you? Read all you can about them, speak to as many reputable breeders as you can, go to some Championship or Open shows to see as many of them as you can and meet the breeders, find out about local rallies which take part in the winter and go along and talk to the people competing.

The old adage of give them an inch and they will take a mile applied with this breed, they need firm discipline, and lots of socialising, its a bit like having a teenager in the house who will continually chance his arm. They can be destructive if bored, and digging well need I say more they are masters! So, if you are up for a challenge and are not garden enthusiasts then read on and meet our Characters, because the pleasure definitely out ways the hard work.

All stories should have happy endings, for us this is not the end, merely the beginning of trying to establish our kennel and bloodlines, hopefully building on Hades fabulous achievements, whilst enjoying every minute of our time with this very special breed.