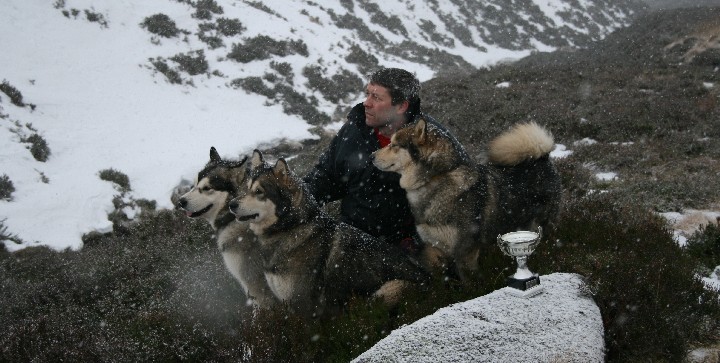 We are a small family kennel, whose love is Alaskan Malamutes. Our dogs are worked at rallies throughout England, where because we very rarely have snow and so cannot compete on sleds, we race on three wheeled rigs. We also compete at conformation shows both in the UK and in Europe, and have regularly competed at Crufts.

We went off to?Blackpool?this month and enjoyed the most wonderful of days with the most beautiful of weathers.

Ghost was entered and shown by Bryony and did us proud by placing 3rd in the Junior class,?a Crufts qualifying position.

Then just for a change as Mr Micheal Craig was still recovering from celebrating his success at the world dog show, I showed Hades. Despite the fact that Hades wanted to move a lot more than I want or could run we finished a very good 4th against some excellent competition. 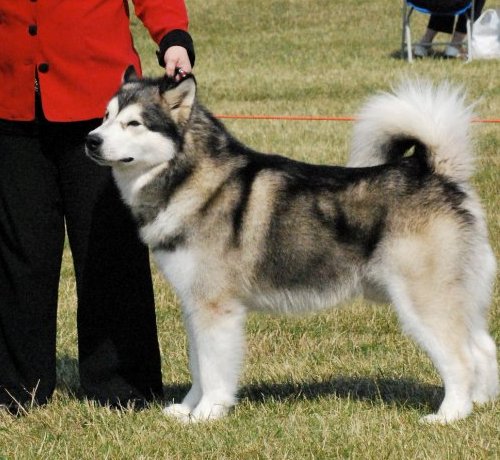 The following week saw us at?Windsor?dog show in blistering heat, with paddling pools underneath the water taps for the dogs!!

Ghost once more did us proud winning the Junior bitch class and finally showing that she is growing into a very nice young lady! 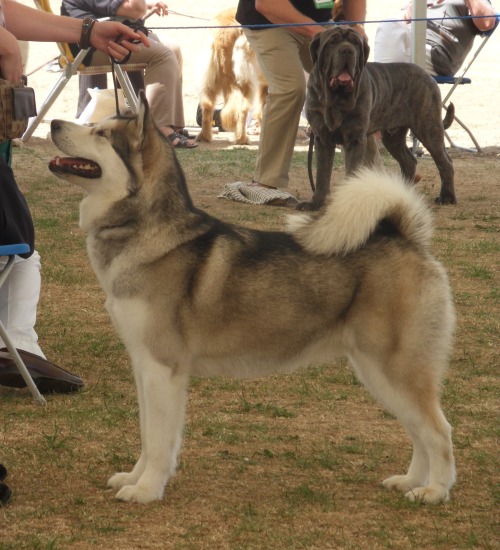 Hades was handled by Michael and finished a very good 3rd. 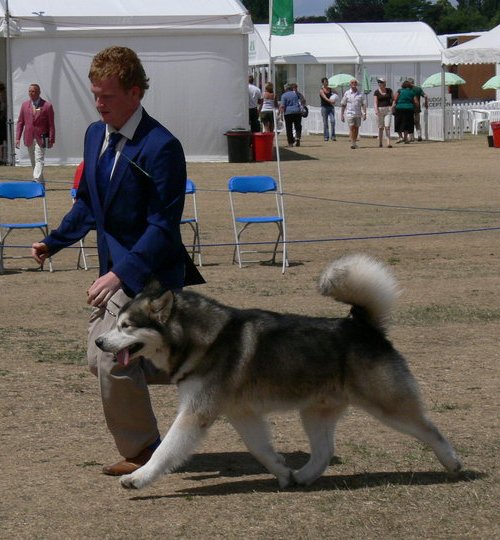 John and I had a lovely afternoon enjoying the beer tent and staying to watch the group which was very hotly contested.

We also this month had a return visitor, Tikaani came back from his owners in Kent due to family problems and had to be rehomed.

Despite the fact that he hadn’t seen his older brother Lucifer since he left at 8 weeks and now he was nearly 18 months old, they both became best friends with lots of face washing and tail wagging. 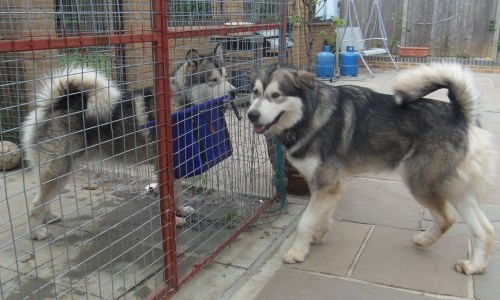 Khan has now been rehomed with a lovely family Chris his wife Sadie and baby Ellie. Chris is in the army and a PT Instructor so Khan is going for long daily runs and by all accounts loving his new family life.

We are pleased to announce the birth of our Mirage (Marahootay Optical Illusion) x Nash (Am Ch Terrapin Kasaan’s Roc Solid) litter.  She brought us 4 Princes and 4 Princesses! Mum and babies are doing well, and we’re looking forward to bringing you more photos as these puppies grow! Here’s the pedigree for this litter:… END_OF_DOCUMENT_TOKEN_TO_BE_REPLACED

Here’s some more from our August photoshoot, this time with Genie (Marahootay Gene Genie). END_OF_DOCUMENT_TOKEN_TO_BE_REPLACED

Here’s a gallery from August 2016 with our beautiful Mirage (Marahootay Optical Illusion) having fun in the garden. END_OF_DOCUMENT_TOKEN_TO_BE_REPLACED

At 9 weeks old, these puppies were about to head off to their forever homes when we had this photoshoot. Q: What do soft fluffy puppies do after having a bath and blow dry in preparation for the shoot? A: Get wet and dirty again as quick as they can! Enjoy 🙂 END_OF_DOCUMENT_TOKEN_TO_BE_REPLACED

Wow! The puppies have changed so much in a week. Their coats have grown out and they are all fluffy, and they have grown in confidence running around in the pen! It’s nearly time for them to go to their new homes, so enjoy your puppy fixes while you can! END_OF_DOCUMENT_TOKEN_TO_BE_REPLACED

It won’t be long before these beautiful puppies head off to their new homes. Get your puppy fix while you can! Are you interested in a puppy from this or a future litter? Please see our ‘Available Dogs‘ page. END_OF_DOCUMENT_TOKEN_TO_BE_REPLACED

Feast your eyes on the puppies as they bite, lick, growl and howl their way ever further into our hearts! Some great personalities starting to show through! END_OF_DOCUMENT_TOKEN_TO_BE_REPLACED

2 females puppies from our 2016 Lilo x JJ litter are still available! If you are interested in offering a home to one of these puppies please contact us on suemals@hotmail.com or call?07935 951264. Please let us introduce you to the puppies one by one … (click for the larger image) … Mr Brown Mr… END_OF_DOCUMENT_TOKEN_TO_BE_REPLACED