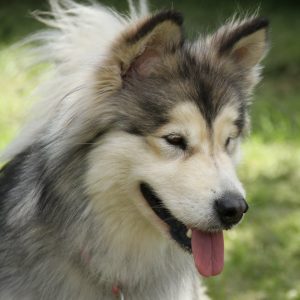 Genie is a bundle of fluff and fun, she is very very in your face and demanding of fuss and attention, definitely not a shrinking violet. Obviously Genie was named after the Genie in Aladdin and is the sister to Sultan. She is very sweet, but always up to no good with digging and splashing around being her favourite pasttimes.

Being a soft coat and just a little long Genie won’t be able to be shown, however she will be worked and will begin her training together with Sultan in the Autumn hopefully allowing John to run a three dog team next year.

She has plenty of heart and although small moves like the wind, she is beautifully compact, with the sweetest of faces and soft almond shaped dark brown eyes. She has fabulous angles and her movement is effortless, and as to bone and paws well you should see her FEET!!

We hope eventually to breed from her but will spend some time finding the right boy to give us what we are looking for.