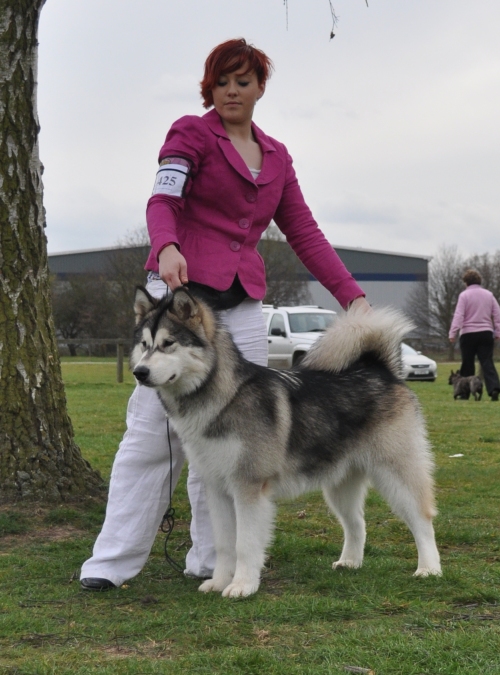 Sultan is one of the pair of pups we kept from our Hades x Effie breeding 2010. He is named after the Sultan in Aladdin. He has a lot of his Daddy’s temperament; he is very loving and enjoys nothing more than cuddling up for kisses and cuddles. He is very laid back and is being shown by Francine who he adores.

Sultan and Francine have already begun showing together as a team and after a few hops and skips and the occasional nip of Francines bum he seems to have sorted himself out and has begun to understand what is expected of him. With this said he succeeded in his second show at the Herts and Essex Open show in winning Best Puppy in Breed and then going on and taking Puppy Working Group 1st Place. So look out for him at the remainder of the shows in 2011.

John is looking forward to training him and his sister to work in the Autumn with a view to running a three dog team again at Aviemore We hope that Sultan will follow in his father’s footsteps and work his way towards his championship titles.

At the moment he is only a little baby but he already had lovely dark almond shaped eyes, a beautiful harsh coat and has lovely angles and movement with plenty of bone. He is a pleasure to own and has a great zest for life just like his mummy and daddy.