Hi Sue its Hope with an update on Jake.

He is doing very well still full of energy, he has a cheeky side now and can be naughty and when you look at him he has a smile saying ” i didn’t do it ” it’s very funny. He’s starting to get quite vocal as well he will bark or howl at some noises or if he sees a friend of his he will howl at them to say hello.

When it is hot we let him in the big paddling pool to cool off, he will jump in and out of it and stand still in the water but won’t sit or lay down in it. My dad reckons its because of the cold water touching his bum as he tried to before and jumped out of his skin, it was bit of a shock to him but very funny to see.

Like i said before he likes to jump in and out the pool and runs round the garden like a nutter and then shakes off right next to you so you get wet, or he will jump up at you to give you hug. 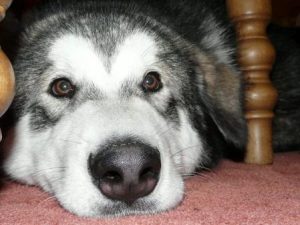 Part of his cheeky side is he will bark when he wants to see my nan and grandad as they only live next door to me and we have a gate linking the two gardens. Jake will bark for someone to open the gate so he can chill in their garden.

Also in the evening when everyone is watching tv he will come to see you, first he will just put his head on your lap then slowly put a paw at a time on the sofa so he is sitting on you. I don’t think he realises how heavy he actually is because he act like he is a little dog that sits on your lap. 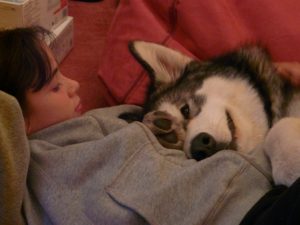 I still take him out for long walks which he enjoys very much. He is very well behaved on walks as I know he is too strong for me if he really wants to pull but he walks to heel, well sort of but does not pull on the lead at all.

I take him to the park on my own sometimes and let him off the lead in the dog area. He loves to run around and sniff exciting smells or chase squirrels or other dogs. We still get stopped alot in the street by passers by saying how cute he is or wow look how big he is.

Jake still has his lazy ear and I wonder if it will ever go up like his other ear.

We have been taking jake running, well sometimes I run with him but most of the time I will ride my bike and he will run alongside me. My dad also bought a scooter for him as one day I hope to run him like you do with your dogs. Jake loves its to bits he will know if I’m going running or using the scooter as soon as i pick up his harness he will start barking and howling and run around in circles in excitement!

I cant think of anything else to say about him at the moment apart from he is a wonderful dog to have around!

October 2008: News from Jake and Hope

Hi Sue, it’s Hope again. I just wanted to e-mail you to give you an update on Jake. We all have been attending puppy classes and it has been going very well. We have successfully completed puppy school, we all have learnt alot! He can sit, lay down, stay and come when told, wait and even put in a few tricks like paw, high five, wave hello and goodbye, bow, spin.

Every one loved seeing Jake at the puppy class and you could see the size difference especially as there was a miniature dachund that has been attending and she was older than Jake but she was about the size of his paw! He has grown alot as well he never stops growing…

He enjoys going out for walks and loves attention of all kinds of people. I have met a few people that actually knew what malamutes were! I have been taking him up to my old primary school at home time so he gets used to lots of younger people being around and he seems to enjoy it and the kids there love him to bits!

He walks very nicely on the lead especially if you have food in your hand! If he pulls in front I just say heel and he either looks at me and comes back to my heel or he stops and wait for me to catch up! He is lovely to have round the house as he is soo well behaved, he has a crazy half hour where he runs riot in the garden usually after a walk when you think you drained out his energy but you’re wrong. He storms through HIS ROOM into the garden sprints around and is quite scary when he runs towards you as he never stops, as soon as his crazy half hour is up he’s zonked out and asleep where he drops which is good as it gets very quiet so I can get on with my homework.

As you can see in a couple of the pictures he has one ear standing up and one lazy ear . . . we are all waiting for that ear to stand up with the other one so he looks like a proper malamute like his mum and dad even though he acts like a kid and is a really big softy (I think he looks very cute!!!)

I think he has mums side on how to get on the sofa as when my dad, mum, sister or myself are lying on the sofa he jumps up to give you a big bear hug which’s is good but then he gets one hind leg up on the sofa and he thinks is my cat and climbs up on the sofa and squashes you! Its soo funny and I got a few pictures on my mums phone where he has squashed my mum on the sofa you could hardly see her! 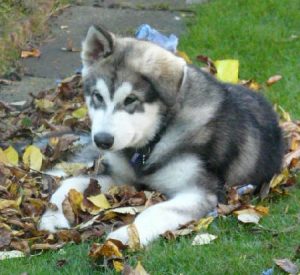 September 2008: News from Jake and Hope

A message sent from Hope: I wanted to send a few pics that I took of Jake last week. He is getting bigger every second, sometimes when I walk in from school I open the door to say hello and this giant bundle of fur comes charging towards me to give me a kiss.

He is settling in very well going to the toilet where he is supposed to most of the time and playing football or squeaking his squeaky toy (very loud and drives me crazy). We are going to take him to a puppy class near us to give him some lessons on how to be a good puppy and gives us a few lessons on how to teach him!

When we took him down to the beach he loved it! running around chasing the sand and jumping in the sea! 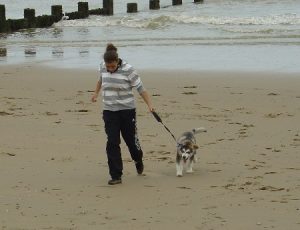 The bad thing was he stunk of sea water so we had to wash him the next day which he didn’t enjoy! 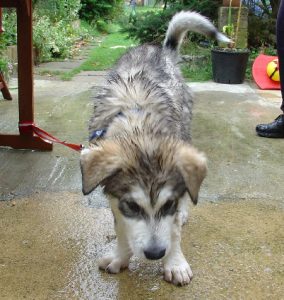 We are starting to take Jake out for very short walks (up to the shop and back) and I took him football a couple of times and all you hear is I WANT ONE OR LOOK AT THE SIZE OF THE PAWS! its soo funny. My old team mates don’t leave him alone but he likes the attention so its all good.

Jake is settling into his new home nicely, stealing shoes, playing with the girls. 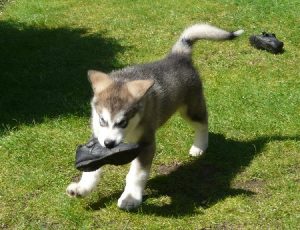 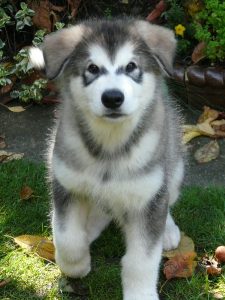