As you can see Shadow loves the recent snow we’ve been having. He lay there whilst the snow was coming down until he was nearly completely buried. We kept on opening the back door calling him in but he just laid there!!! 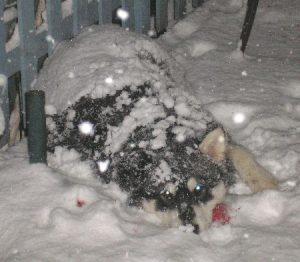 Just thought it was about time that I sent you an update about Shadow’s progress. He has grown unbelievably & now weighs 5 stone!!!

He is so funny – only this morning I caught him sitting watching the fish swimming around in the fish tank again. And he regularly sits on our patio for hours just watching all the birds flying around in the sky. He’s probably silently hoping he could pounce on one to play with it – probably thinking it is a toy.

We put our Christmas tree up last week & so far he has practically ignored it – which I am very surprised at!

He is still going to football every week & has a new friend who is also a team mascot – an 8 week old chocolate Labrador called “Paddy” who can’t mix with other dogs yet so our friends have him in their arms the whole time & Shadow probably thinks he is a toy as he’s so tiny! Shadow was never that small – ever !!??

It was so nice to see you all at the Buttersteep Rally last month, what an amazing day with so many dogs there I’m not sure what Shadow was thinking but he enjoyed playing with his 2 brother’s and his sister. As well as Mum, Dad & Auntie of course! 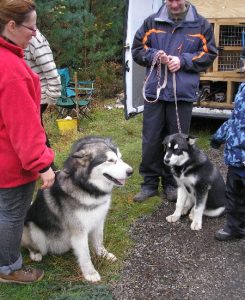 I swear that we came home with the wrong dog though as I said to my husband “but Shadow has white legs and this dog is black!!”

I have attached some photos of the day including where the boys were so worn out on the way home that they slept like babies. 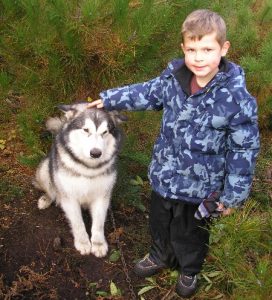 He is doing very well at his obedience classes even though we have missed quite a few with the various bugs that we have had. We had a very proud moment when after only 5 weeks of classes we had an exam and they suddenly announced that they had a clear winner and it was Shadow!! 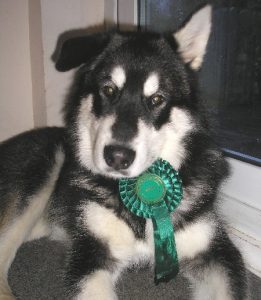 “For exceptional heelwork as well as very good all round – Shadow is Top of the class“, the trainer said. Well done Shadow.

He is still going to school with the boys twice a day & gets so much attention from lots of Mum’s, Dad’s & children. Now if I had a pound for every time I hear -“oh my god hasn’t he grown!”, rather than the ” is it a husky?”

Shadow so loves his big cuddles and always comes up and puts his front paws on me so he takes over the chair that we are sitting on, unless I am standing when he wants a cuddle and he stands on his back legs where he is nearly as tall as me!

As for the cold weather – OMG! He will have a walk sometimes late at night where upon their return Bryan will say “its freezing out there” & he’ll have his thermals on, gloves, hat, the works, & Shadow will go in the garden & either lay on the patio or on the frozen white grass!! I sometimes have such a job to get him to come in & end up freezing myself as he just looks at me as if to say leave me alone, I’m enjoying this. 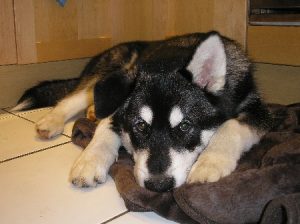 We have just bought him his Christmas pressie – well one of many actually but its his “main” one. A toddlers paddling pool !!! That’s also quite a fancy sand pit with a lid. I’m sure he’ll have great fun with it & as its thick plastic it can’t rip with his claws.

Shadow settling in to his new home.

With a favourite football, after all he has become the boys football team mascot. 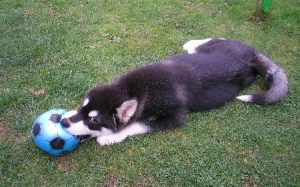 Shadow on the first day in his new home.

Shadow left with Donna, Bryan and the boys (and hopefully no fishing in the Koi Carp pond!).